Target Who Books Donated to Schools: 9673
Inspired Donations by Other People: 416

We are Target Who and we love how some Doctor Who fans support our cause!

In the previous blog entry we reported how Andrew had visited the school in Aldbourne, the village where the 1971 Jon Pertwee Doctor Who serial ‘The Daemons’ was filmed.  It was clear you all enjoyed hearing about that delivery - even the wonderful Katy Manning tweeted her pleasure at hearing the news.

We reported that sadly we had been unable to give them a copy of the novelisation of The Daemons - now long out of print and not one of the titles in the Target Who book hoard!  Not long after the post was published, we received an email from long term Target Who supporter Roger Smith.  He offered to send his own copy and a visit was quickly organised! 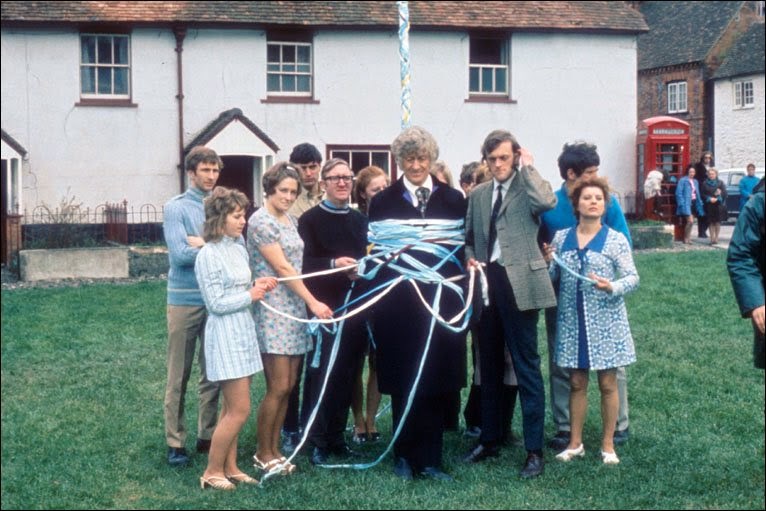 So on Wednesday 16th July I met with Roger, who turned up with not just a copy of ‘The Daemons’, but a set of Doctor Who Quick Reads as well.  “I couldn’t travel all that way and give them just one book” he said.   Roger and I spent an enjoyable day in the village of Aldbourne.  We were given an enthusiastic welcome by the school staff and were told tales of the 1971 BBC visit to the village.  The children of 1971 may have all grown up, but the memory of Jon Pertwee driving them around the village in Bessie still burns bright.

So now the children of St. Michael's C of E Aided School can read an exciting adventure of the third Doctor and the Master.  As they read it, it will be in the knowledge that the village described within the pages is their village and their church.  How magical is that?  They will never be able to look at the church weathercock again without thinking of Sgt Benton!

As it was a beautiful summers day, we took a stroll up to the public footpath to the Four Barrows and tried to work out which one had featured in the episodes as ‘The Devil’s Hump’ (Answers on a postcard please - we couldn’t work it out!).  Finally we had a spot of lunch in The Cloven Hoof pub, or The Blue Boar as it’s known in real life, where we heard more tales of the 1971 filming!

We are Target Who and while we relish every book placed in every school library, the books placed in Aldbourne are dear to our hearts and are dedicated to the memories of Jon Pertwee, Roger Delgado and Nicholas Courtney for the magic they created in 1971


We are Target Who and here is a very special delivery we forgot to tell you about!  (It occurred around the same time I suffered my second detached retina and it became too difficult to blog - Sorry!) 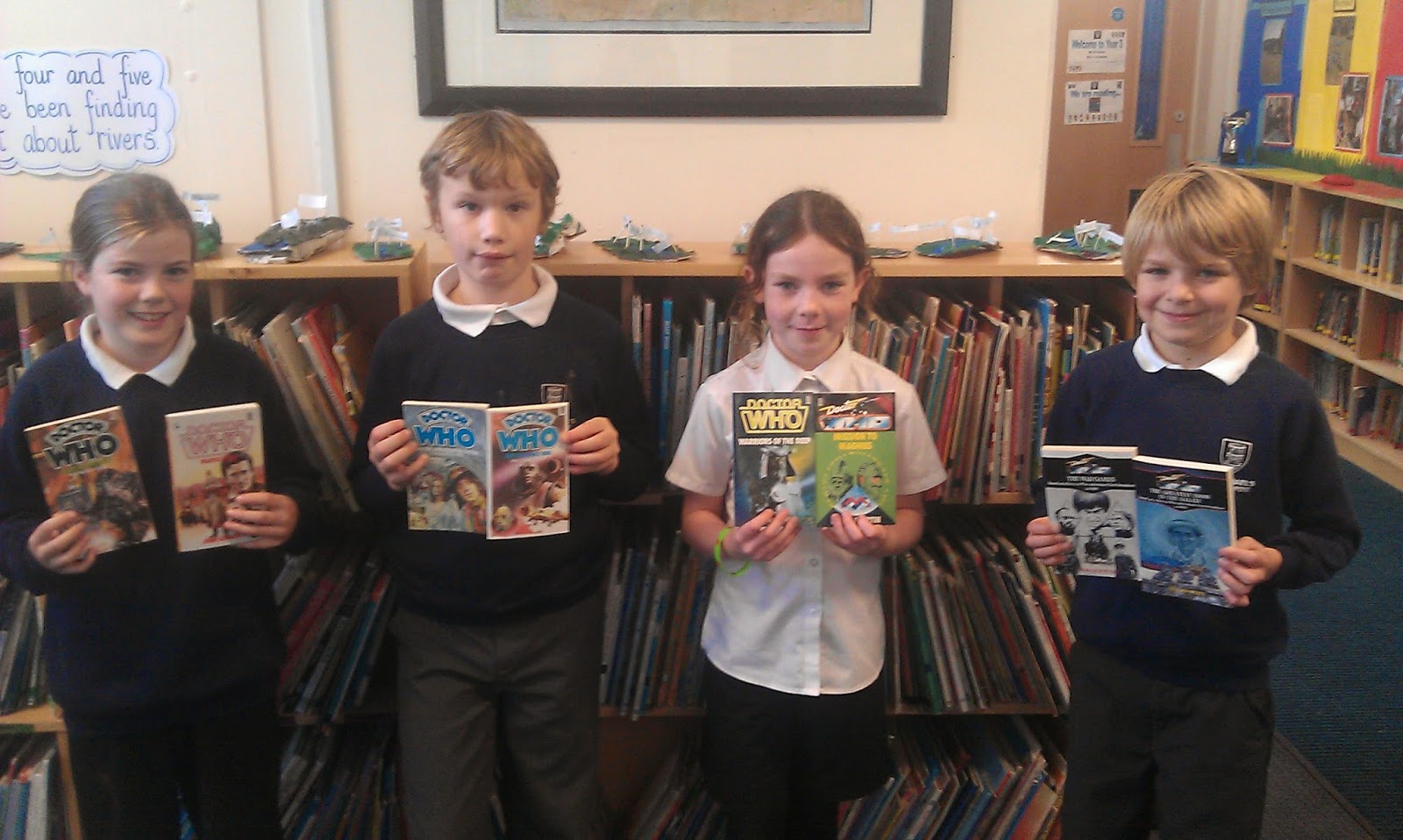 Thousands of books have been ferried between Andrew and I since this project began.  During one of those trips Andrew made a slight detour on the way and called in at the village of Aldbourne in Wiltshire.

Aldbourne has a special place in the hearts of many Doctor Who fans.  In April 1971 the cast and crew of Doctor Who arrived at the village to film location work for the highly regarded Jon Pertwee story The Daemons. Aldbourne became the fictional village of Devil’s End, where an archaeological dig at a Bronze Age burial mound, the infamous Devil’s Hump, unleashed dark forces.  The village church was pivotal to the plot, where the new village vicar, Rev. Magister, was none other than the villainous Master in disguise… 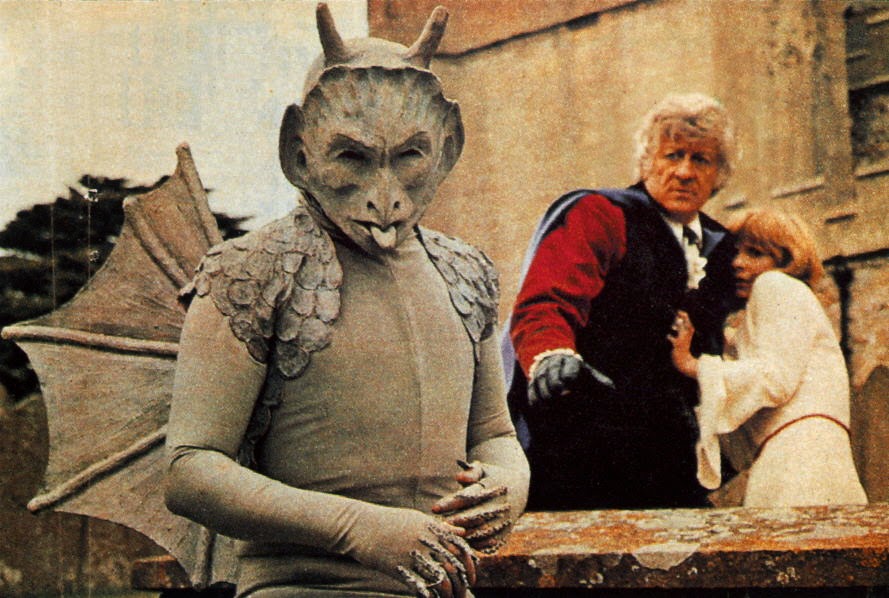 To this day many Doctor Who fans still visit this classic location, and just next to the church they find St. Michael's C of E Aided School. It was the obvious choice for a small bundle of Target Who books, though sadly we had no copies of The Daemons to give them! 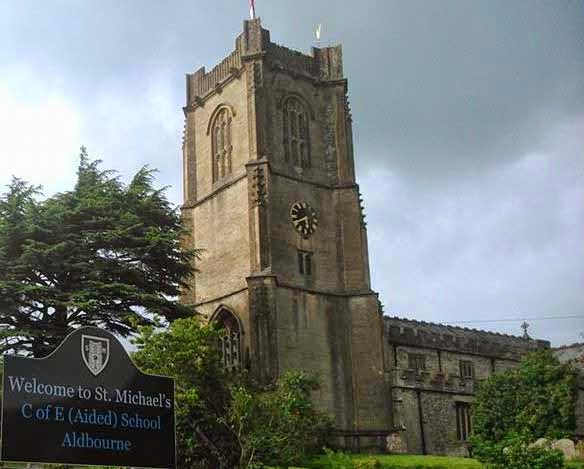 Andrew had the pleasure of visiting the school late last year and got to see the marvellous Doctor Who inspired village litter bins! The villagers can keep Aldbourne tidy by either exterminating their rubbish or popping it into the space-time vortex!

We are Target Who and we hope news of this delivery has put a smile on Doctor Who fans faces everywhere!
Posted by Target Who at 13:49 2 comments:


We are Target Who and this month has seen a scattering of schools across Devon pinned on our Target Who Project Map.  We have three very special people to thank for this progress.

The first person is the wonderful Jeni Jones, a Senior Manager at Hays. I first contacted her late last year while seeking help to reach schools in the South West of the UK.   She enthusiastically agreed to help our project and arranged help in six offices. The two southernmost, Exeter and Plymouth were both areas we had been unable to reach so far.  Getting books to them therefore became out first priority..

The second person to thank is the fabulous Tim Ledger.  Tim is Andrew’s Uncle and, hearing we needed help to reach Exeter, he quickly volunteered to help.  Andrew boxed up the books into small bundles and Tim transported them from Hampshire to the Exeter office.  The books for the Plymouth office were also left with Exeter staff and Plymouth staff will be collecting them soon.  Keep an eye out for pins appearing there and in Cornish schools in the near future. 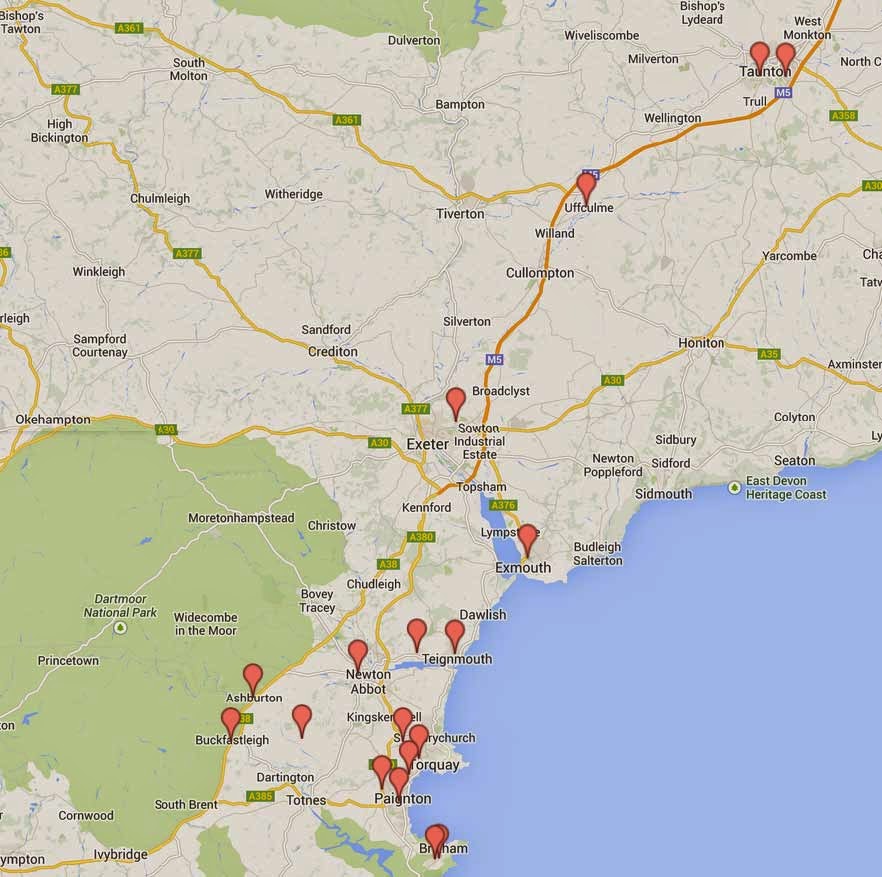 Finally we need to thank the awesome Sarah Blazey of the Exeter office who has been contacting schools and taking the books to their final destinations.  We have been receiving a small flurry of thank you emails from school around Devon and it is lovely to hear how appreciated the books are.

We are Target Who.  We have now placed over 7,000 free books into school libraries and we haven’t finished yet!

Target Who would like to thank Jeni Jones, Tim Ledger and Sarah Blazey
Posted by Target Who at 01:07 No comments:

Seeding the Garden of England

Andy Armstrong is one of the original thirty members of Target Who that donated money to fund the purchase of the books. His contribution didn’t stop there though, as he took on the responsibility of delivering books to interested schools around his county. He’s met up with Andrew a couple of times to collect books, and couldn’t resist stopping on the way home for the below Doctor Who in-joke photograph! 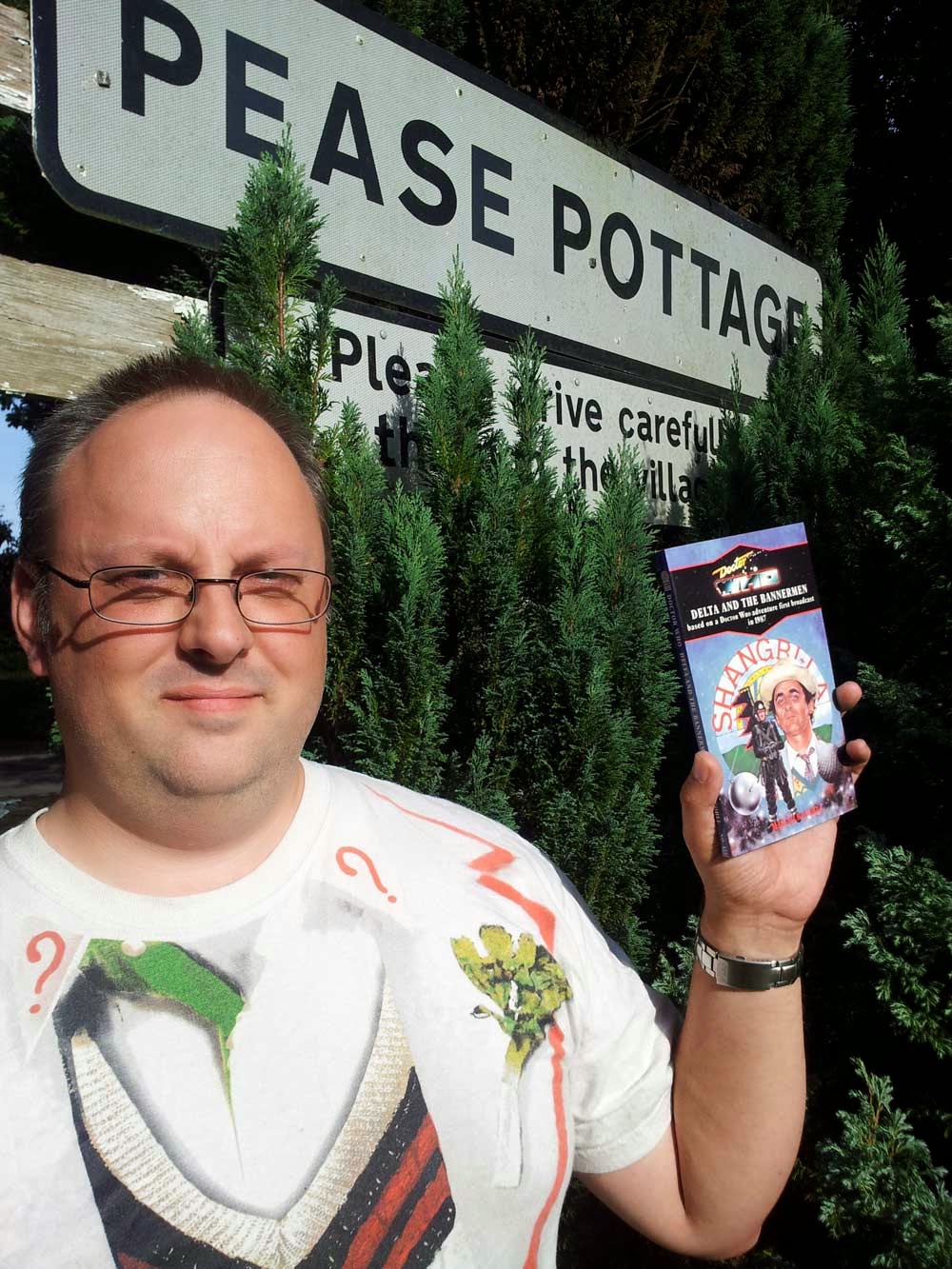 Trying to fit deliveries around his work and family life has resulted in Andrew taking some extremely diverse routes home following his early shifts!   It has resulted in our books slowly spreading out across the county. 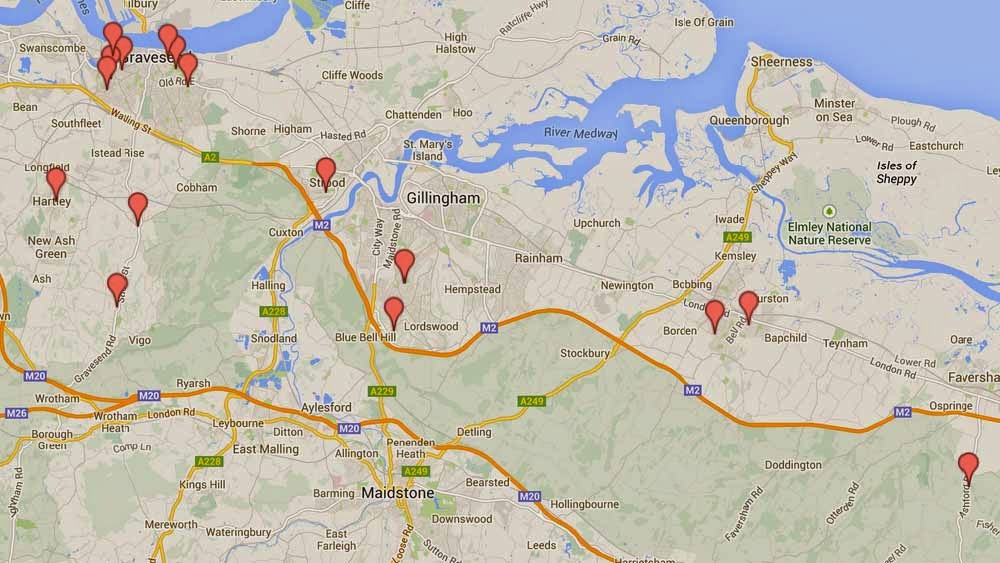 We are Target Who and we haven’t finished with Kent yet.  Keep watching the map for more pins appearing soon,
Posted by Target Who at 21:47 No comments:


We are Target Who and we always expected that there would be parts of the country where help would prove difficult to find.   we didn’t, however, expect that the most difficult place would be London.  We thought it would be easy to find help in our most densely populated city, but that was not the case.

We had two false starts with people eager to help if they could, but it soon became apparent the impossibility of them fitting trips to schools around their busy working lives. Since moving away from London some years ago, I had forgotten how hectic and stressful the London Lifestyle is.  Long hours, long commutes and schools only open for such a short period. Plan B would have seen me take a large suitcase full books down to central location in London to enable teachers to meet and collect their books.  Two detached retinas put paid to that plan!  We were beginning to wonder if we would ever reach London schools!
So when we started contacting Hays Manager, my most nervous telephone call was to their London office.  Would they agree to help, or would they be one of the few offices that turned us down?  I put off the phone call for several hours, fearing the worst…

Thankfully when I made the call, the wonderful Tim Field was full of enthusiasm for what we were trying to achieve.  He immediately pledged the full support of his office to help us reach the waiting London schools.  He also put us in touch with their second London Office, but more about them in another post.

The next task was to get books to their office in Victoria and Andrew braved the London traffic and the congestion zone and delivered books for sixty-three schools.  Deliveries to schools have now started and Tim recently sent in an update to us.  Plotted below are the first of their 63 schools on the Target Who Pin Map. 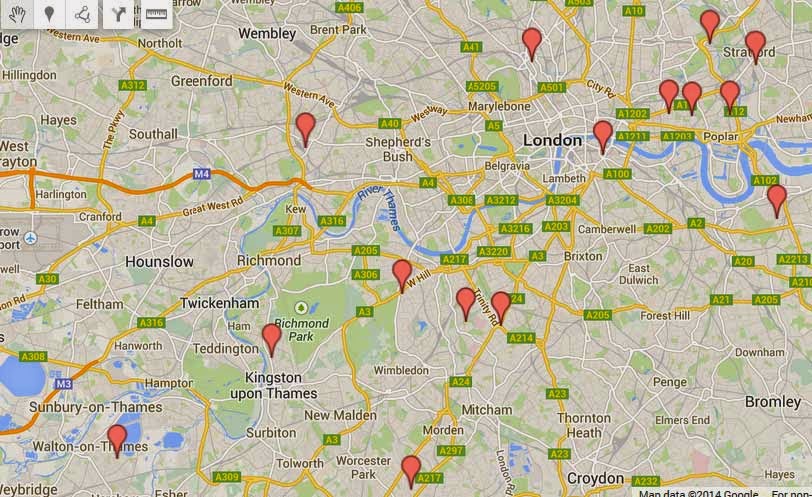 We are Target Who and it’s fantastic to know our books are finally moving out across our Capital City.

Target Who would like to thank Tim Field and the staff of the Hays Victoria office for spreading our books across London.
Posted by Target Who at 10:48 No comments:

Target Who
We are a multinational group of Doctor Who Fans

Target Who in the News